To share your memory on the wall of Gary Rupert, sign in using one of the following options:

He served in the United States Army and the Army Reserves.

He was a member of Newburg United Methodist Church, where he was a Church School Teacher, Trustee, and served on the Administrative Board.

Gary was a volunteer for Chambersburg Hospital, the former Franklin County Visitors Center, the Franklin County Heritage Center, and the Salvation Army. His favorite hobby was Baseball history.

Funeral services and burial will be private.
In lieu of flowers, memorial contributions may be made to Newburg United Methodist Church, P.O. Box 68, Newburg, PA 17240.

Receive notifications about information and event scheduling for Gary

Consider providing a gift of comfort for the family of Gary Rupert by sending flowers.

We encourage you to share your most beloved memories of Gary here, so that the family and other loved ones can always see it. You can upload cherished photographs, or share your favorite stories, and can even comment on those shared by others.

Posted Mar 01, 2021 at 11:56am
Bill and I would like to send our deepest sympathy to Joanna and family and relatives. He will be greatly missed but it is nice to have such a good person to give back their maker. Our son, Mark, text us late last night which I was quite surprised when I opened it this morning. I'm sure Gary touched many lives. He was a nice person and well liked.

Bill and Arlene Plasterer and family

Sorry for the loss Gary was a great man. Prays fprall.
CG

Posted Feb 28, 2021 at 07:59pm
Joanna and family so sorry to get the news of Gary's passing. He will be welcomed into the loving arms of his Lord and Savior. Peace and love, Ron and Kathy Kerr.
Comment Share
Share via:
DK

Posted Feb 28, 2021 at 02:56pm
Joanna, you have my deepest sympathy in the loss of Gary. I know this is a difficult time for you. You enjoyed a long life together and so you have a lot of memories. God bless you in this time of need.
John Ile
Comment Share
Share via: 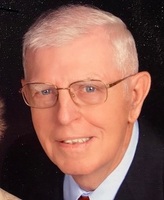