To share your memory on the wall of William Fox, sign in using one of the following options:

Print
William Michael “Mike” Fox, 46, of Orrstown, departed this life on the afternoon of Saturday, March 20, 2021, after a long battle with congestive heart failure.

Mike was born on April 14, 1974, in Frederick, MD, the son of William W.... Read More
William Michael “Mike” Fox, 46, of Orrstown, departed this life on the afternoon of Saturday, March 20, 2021, after a long battle with congestive heart failure.

Mike was born on April 14, 1974, in Frederick, MD, the son of William W. and Lou Anne (Wynkoop) Fox, of Orrstown. In addition to his parents, Mike is survived by his sister, Elizabeth L. Fox and her husband, Dan McGloin of Easthampton, MA; aunts, Teresa Wynkoop of Waynesboro, PA, and Betty Stevenson and husband Tom of Greencastle, PA; numerous other aunts; an uncle from Maryland; as well as many beloved friends.

Until the progression of his disease, Mike had been a produce manager at various Price Rite stores in PA and MD. However, his passion was music. At the age of nine, Mike had his first trumpet lesson and his love for music began and continued, non-stop, for his entire life.

A 1992 graduate of Gettysburg High School, he performed in the Marching and Ceremonial Brass Bands and in Orchestra. He studied music at Millersville University where he developed a love of Reggae music and formed the band Fink’s Constant. As a band member, Mike played guitar and performed vocals. Until a recent health complication, he had also played trumpet. Mike composed many of the lyrics and score for the band’s performances. His humor and witticism will be sorely missed by his family and friends.

His funeral arrangements have been entrusted to the Fogelsanger-Bricker Funeral Home & Crematorium, Inc., Shippensburg. There will be no public viewing, visitation, or funeral service at this time. However, a celebration of Mike’s life will take place at a future date.

Type into search engine: Giving at Penn State Health
Click on: Milton S. Hershey Medical Center
Click on: Donate Today
-When you get to "I would like my gift to benefit", choose the last bullet, "A specific area or multiple areas."
-Under Department & Institutes, click on Heart & Vascular Institute.
-Info for Notifying Person of Gift: Mr. & Mrs. William W. Fox at 10119 Blue Jay Circle, Orrstown, PA 17244.

Receive notifications about information and event scheduling for William

You will receive any future notification messages.
No funeral details available.

Donations are being accepted for: Penn State Heart & Vascular Institute.

We encourage you to share your most beloved memories of William here, so that the family and other loved ones can always see it. You can upload cherished photographs, or share your favorite stories, and can even comment on those shared by others.

Posted Mar 27, 2021 at 09:37am
I worked with Mike at Weis Markets. He was the asst produce manager he worked with Denny. On the weekends we went to see him play. We traveled locally to see Mike. He was a great musician and we enjoyed to listen to him. We went out a couple of times he was a such a sweet guy. There is a lot of memories I do have of him. He will be missed I am still
In socked this happened. Will pray for Mike Family and Rest In Peace.
Comment Share
Share via:
GW

Posted Mar 25, 2021 at 05:13pm
I met Mike online through our mutual love of music, we had many conversations whilst Mike was hospitalised, especially about the hospital food, and although we never met in person his ability to make light of his situation shon through, I feel very privileged to have shared a small part of his life, he was a brave fighter, and I hope He’s now at peace and no longer in pain, RIP Mike, one in a million
Comment Share
Share via:
KO

Posted Mar 25, 2021 at 01:41pm
During our time at Millersville Mike invited me to be part of his bowling team “Big Bubba Shackel”. We (I) were terrible! We got a trophy for “worst bowlers”. It was the most fun I had during college. He always put a smile on people’s faces.
Comment Share
Share via:
GM

Posted Mar 24, 2021 at 09:37pm
The first time I met Mike was at my son Dan and Liz’ wedding. What an impression he made with his wit and charm as he performed the ceremony. I will always remember him as friendly, funny and so personable.
I pray that the grief will ease after awhile and be replaced by many good memories.
God bless you, Mike. Heaven has gained a wonderful man.. Gloria McGloin
Comment Share
Share via:
L

Posted Mar 23, 2021 at 10:58pm
So sorry Bill and Louanne, Beth, I was shocked to read about Michael in the Gettysburg Times. Remembering all the good times and funny stories will help you get through the rough times now and in the future. Your family is in my thoughts and prayers. The other LuAnn
Comment Share
Share via: 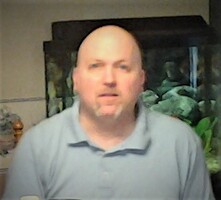 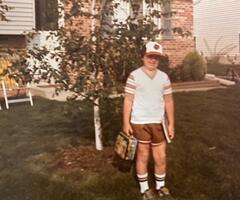 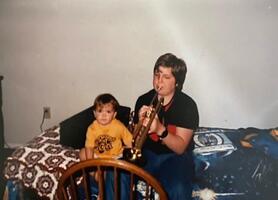