To share your memory on the wall of Tracy Burke, sign in using one of the following options:

Print
Tracy Vanessa Burke, 62, of Harrisburg, passed away on Monday, May 24, 2021 at UPMC Harrisburg Hospital.

Born Saturday, June 7, 1958 in Shippensburg, she was a daughter of the late Jack Theodore, Sr. and Sarah Katherine Nocho Burke.Read More
Tracy Vanessa Burke, 62, of Harrisburg, passed away on Monday, May 24, 2021 at UPMC Harrisburg Hospital.

Born Saturday, June 7, 1958 in Shippensburg, she was a daughter of the late Jack Theodore, Sr. and Sarah Katherine Nocho Burke.

Tracy was a 1976 graduate of the Harrisburg High School. She was a member of Penn Street AME Church in Shippensburg. Tracy retired in 2019 from Highmark Blue Shield as a Computer Analyst.

In addition to her parents, she was preceded in death by one brother, Randy Lynn Burke and her maternal and paternal grandparents.

Tracy was kind, caring and a giving person who would do anything for her family and close friends. Her most unselfish act was twenty years ago when she brought her dad from Shippensburg to Harrisburg to share her home. Over the years, as they both aged and their health failed, she made sure that her dad was kept comfortable.

Tracy was loved by her family and will be missed by everyone who knew her.

A private graveside service will be held in Locust Grove Cemetery, Shippensburg, with the Rev. Walter R. Reed officiating.

Receive notifications about information and event scheduling for Tracy

Consider providing a gift of comfort for the family of Tracy Burke by sending flowers.

We encourage you to share your most beloved memories of Tracy here, so that the family and other loved ones can always see it. You can upload cherished photographs, or share your favorite stories, and can even comment on those shared by others.

Posted Jun 02, 2021 at 10:14pm
I am so sorry to hear of Traci's passing. We worked together at Highmark in the 90s, sharing the same responsibilities. There was no better coworker than Traci, she had your back every step of the way. She kept me grounded and I loved to make her laugh, most of the time she rolled her eyes and said "Oh my goodness". She would do anything for you and was a great friend. I remember Angelique was a dream come true and she enjoyed every minute she spent with her. She loved her family very much and my prayers are with you at this sad time. My condolences, Sue Fortney
Comment Share
Share via:
AP

Posted Jun 02, 2021 at 09:57pm
I remember living next door to Aunt Tracy on Chestnut St. and she would come over to visit almost daily. I was on punishment and she was watching me and I got to eat all day. Love and have missed you very much. Love Andi
Comment Share
Share via:
KJ

Aunt Tracy was like a second mom and dad to us. Always had her eye on us from next door but always gave us the right amount of love and freedom. Kept us out of trouble and part of the reason I’m here today. Miss you, Rest In Peace.
GB

Posted Jun 02, 2021 at 10:39am
Traci, my baby sister was born on June 7, 1958. I was almost 9 years old when my mother delivered her beautiful baby girl into our family and my world.  I don't remember how old I was when my mother allowed me to first watch my baby sister, but it was probably not until was 10 or 11. I loved my baby sister from the first day she was brought home from the hospital and that I am positive that I must have asked to watch her many times before I was told by my mother that I could do it.  After that I was in charge of her, and by in charge I mean allowed to watch her in her baby stroller no further than right outside our home. I was so happy when I was watching her for mom. Traci would look up at me from her baby stroller and I would look down at her and see her pretty smile and I would just watch her for hours and never give her back to my mother until she would ask me to.  I was completely amazed by this little girl and I was very shy and she would just smile back at me and it did not matter what I was saying to her.   Even now 63 years later I can still see in my mind's eye me looking down at her as she laid in her baby stroller and her smiling back at me.  My sister dedicated her whole life to doing for others beginning with physical care for our aunts, our grandmother, our mother, and then our father. Later as her health was failing she continued to make wellness phone calls everyday to the many people in our large extended family.  I know now from our talks near the end of her life that she did so with only one regret. Her only regret was that she never had an individual family of her own, and that she never brought a baby home as our wonderful mother had her.  Tomorrow, I will watch as my baby sister's remains are placed into the earth, and I will not smile, I will try not to cry, and I will pray that I will see her again, and that we will smile at each other again forever!
Comment Share
Share via: 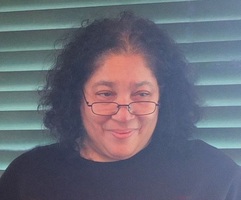