To share your memory on the wall of Terryl Henry, sign in using one of the following options:

Print
Terryl “Terry” Louise Henry, 77, formerly of Mountville, PA, late of Shippensburg, departed this life on the evening of Wednesday, May 26, 2021, at Elmcroft of Shippensburg.

She was born on September 11, 1943, in Reading, the daughte... Read More
Terryl “Terry” Louise Henry, 77, formerly of Mountville, PA, late of Shippensburg, departed this life on the evening of Wednesday, May 26, 2021, at Elmcroft of Shippensburg.

She was born on September 11, 1943, in Reading, the daughter of the late Elmer and Betty (Painter) Schlegel.
After earning a Bachelor’s degree in business at Millersville University, Terry went on to have an over thirty year career as a department manager at Sears, Roebuck, & Co. After retiring from Sears, Terry worked as a teacher’s aide at the Lancaster-Lebanon Intermediate Unit #13 for nine years. Terry had an immense love for Lancaster County and thoroughly enjoyed the time that she spent living and working there.

Terry was an avid reader and as such, always supported local libraries where she lived. She also loved her cat Casey and made sure to contribute to local SPCA organizations to help with their expenses. Terry enjoyed gardening and cooking and was well known for her delicious lemon sponge pie. Having vacationed in Cape May, NJ, Terry loved the beach and most importantly, loved to spend time with her family.

In addition to her parents, Terry was preceded in death by one daughter, DeAnn Powers, who died on July 11, 2019.

Her memorial service will be held at 4:00 p.m., on Tuesday, June 1, 2021, at the Christ United Methodist Church, Shippensburg. Pastor Bruce Levy will officiate. Funeral arrangements have been entrusted to the Fogelsanger-Bricker Funeral Home & Crematorium, Inc., Shippensburg.

In lieu of flowers, please consider a memorial contribution in Terry’s name to your local library and/or SPCA organization.
Read Less

Receive notifications about information and event scheduling for Terryl

Consider providing a gift of comfort for the family of Terryl Henry by sending flowers.

We encourage you to share your most beloved memories of Terryl here, so that the family and other loved ones can always see it. You can upload cherished photographs, or share your favorite stories, and can even comment on those shared by others. 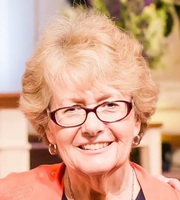