To share your memory on the wall of Edward Vymazal, sign in using one of the following options:

Print
Edward “Tony” A. Vymazal, 74, of Shippensburg, departed this life on the afternoon of Sunday, January 31, 2021, at his home with his loving family by his side.

Edward worked as a Pennsylvania State Trooper from 1969 until his retirement in 1991. While in the PSP he was a part of the Water Rescue and Recovery team and HAZMAT team. After retirement, he was actively involved in his community, Southampton Cumberland Township and CFJMA.

His memberships included the American Legion, VFW, and Life Member of the NRA. He was past president of the National War Dog Monument Association, member of Vietnam Dog Handlers Association and a board member of K9s of the War of Terror.

His love of water led him to become a Certified NAUI Scuba instructor. He shared many memorable adventures with family and friends.

In addition to his wife of fifty-one years, Ruth Ann, he is survived by two daughters, Tanya Vymazal and her companion, Michael Lavoie and Nichole (Vymazal) Kirby and husband Chad, all of Shippensburg; three grandchildren, Kalyn Rine of Shippensburg and Cole and Jenna Kirby of Shippensburg; his brother, Don Vymazal; his sister, Trudy (Vymazal) Keiper-Rux; and several nieces and nephews.

His funeral services, entrusted to the Fogelsanger-Bricker Funeral Home & Crematorium, Inc., Shippensburg, will be private. There will be no public viewing or visitation. Interment will also be private.

In lieu of flowers, memorial contributions in Edward’s name may be made to K9s of the War on Terror at www.k9wt.org or Folds of Honor at www.foldsofhonor.org.
Read Less

Receive notifications about information and event scheduling for Edward

Consider providing a gift of comfort for the family of Edward Vymazal by sending flowers.

We encourage you to share your most beloved memories of Edward here, so that the family and other loved ones can always see it. You can upload cherished photographs, or share your favorite stories, and can even comment on those shared by others.

Posted Feb 24, 2021 at 06:40pm
I new Officer Vymazal in 1972 and 73 when I worked Graham's Sunoco in Shippensburg at the route 81-King Street Exit. I really enjoyed knowing him and hearing of his experiences while we serviced the PSP cruiser. Knowing him was a pleasure and he often gave me very good advice. I'm glad Officer Vymazal was placed in my life - another one of God's gifts. I pray he's in Heaven in eternal joy.
Comment Share
Share via:
EG

Posted Feb 04, 2021 at 10:09pm
Dove with Tony a lot. Started when he was with PSP and a drowning victim in a car outside of Newville. Spent many days with him in Jamaica & Mexico. Also, cavern diving in Florida. He was a great guy and will be missed by all who knew. He and I had many stories to tell.
To Ruth Ann, Tanya & Nichol, I'll never forget Tony and all of our time together.
R.I.P. Tony

Posted Feb 02, 2021 at 08:03am
Worked with Tony on the Pa State Police in Everett on the turnpike. Great guy and a great Trooper. Rest in peace Brother.
Comment Share
Share via:
GM

Posted Feb 01, 2021 at 03:29pm
God bless Tony....
You served your country and a great career in the Pennsylvania State Police. I knew you quite well during those years
as I was based out of Carlisle. You will be thought about and missed by the people around you. Rest in peace.
Greg Maloni
Comment Share
Share via: 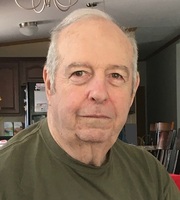